The build quality is exception and it is made out of metal (however surprisingly lightweight - measuring only 300 grams. The focus ring is smooth and buttery to my hand and moves rather fluidly.

It's not weather sealed, like Fujifilm's less expensive, smaller Fujinon XF 23mm F2, but an f/2 doesn't quite blur out backgrounds like an f/1.4.

The XF 23mm F1.4 R is one of the larger prime lenses for the X mirrorless system. It measures 71 x 63mm, weighs 300 grams, and supports 62mm front filters. It's certainly bigger than the XF 23mm F2 (which has also a smaller, 43mm filter thread), but it also captures twice the light when shot at maximum aperture.

The barrel is black and feels quite sturdy thanks to a metal exterior. There's no weather sealing like you get with the XF 23mm F2, but you do get an aperture control ring and a clutch-style manual focus ring. The former is common among Fuji X lenses. It supports third-stop adjustment from f/1.4 through f/16, and also has an A setting to move aperture control to the camera body.

The focus clutch isn't something you get on every lens. The manual focus ring turns freely when the lens is set to autofocus, but doesn't do anything. But pull the ring in toward the base of the lens and you'll hear a satisfying click. Now it turns with a bit of resistance, with hard stops at the close and distant ends of its focus range. It's still a focus-by-wire design—turning the ring activates a motor to change focus, rather than adjusting it via mechanical means.

In practical terms, though, the XF 23mm's manual focus behaves much like a mechanical lens. The manual focus ring is linear, so no matter how fast you turn it, focus will land where the barrel is set. Printed distance markings are revealed when the lens is set to manual, and there's a corresponding depth of field scale. You also get a distance scale in the viewfinder, so you know where the lens is set without taking your eye off the action.

The autofocus motor is moderately quick and very laud (if you are planning to use this lens for vlogging, you won’t hear anything but the focus motor sound with the built-in camera microphone.

The lens doesn't have image stabilization, which isn't surprising given that it's a wide-angle prime, covering the same angle of view as a 35mm on a full-frame system. If you want stabilized results, you'll need to pair it with a camera body with sensor-based stabilization (like a Fujifilm X-T4 or X-H1).

The quality of optics is exceptional, sharp, bright and crispy, especially in the frame center. Wide-open, center sharpness is simply phenomenal! There is some sharpness fall off toward the edges. The bokeh quality is impressive especially moving closer to the subject (the minimum focus distance is just over 280 mm).

Fuji does a lens profile correction in camera, and as result, vignetting, chromatic aberrations and distortion are minimal. Bottom line, the results produced by this lens are lovely.

The 23mm focal length is one of those rare lenses that will satisfy both the enthusiast and professionals. Offering up a lot of versatility, the 35mm equivalent is often found in the bags of wedding, landscape, street and even environmental portrait photographers. The Fujifilm Fujinon XF 23mm F1.4 R lens combines strong optical performance with a bright f/1.4 maximum aperture. 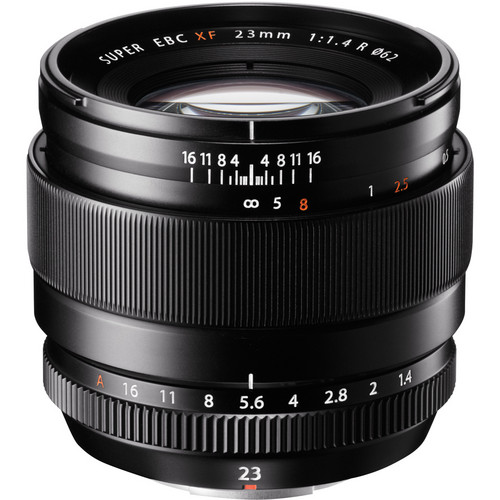